History of
The Garden Club
of Denver

Established in 1916 and elected to membership in the Garden Club of America (GCA) in 1920, the Garden Club of Denver was “founded on a mutual love of gardening and the natural beauty of Colorado, seeking knowledge and expertise in horticulture, conservation, and flower arranging and sharing ideas and skills not only with its members but also with the community at large.”

The Garden Club of Denver has contributed to the Denver community in many ways over the past nearly 100 years, always keeping that purpose in mind. Two early club activities were a planting project that established a Wild Flower Preserve on Genesee Mountain in 1919 and fliers on conservation that were printed and distributed in Denver Public Schools in 1921. The club has established gardens in many locations in the Denver area and along the Front Range, including the Denver Art Museum, Four Mile Historic Park, the Central City Opera House, Ninth Street Park, and the Westwood Community Housing Project.

Throughout its history, the Garden Club of Denver has also been closely associated with Denver Botanic Gardens (DBG). Even as far back as 1925, the Club’s minutes reflected a hope that land near Cheesman Park could be obtained for a Botanic Garden and Arboretum. GCD members were among those who signed the Certificate of Incorporation of the Denver Botanic Gardens Foundation in 1951, when the site was initially located in an area of City Park. Extensive involvement with the Gardens has continued since that time, first with the establishment of the current site at Tenth and York, the donation of the Waring House, and major funding for the original greenhouse. Other gifts to DBG over the years have supported such projects as the Lobby Court, the Home Demonstration Garden, the Green Roof, the native garden at DBG Chatfield and Lainie’s Cutting Garden, in honor of longtime GCD member and DBG volunteer, Lainie Jackson.

A project of which we are particularly proud is our partnership with the Gardens and the U.S. Forest Service to create the Mt. Goliath Nature Center. Learn more about this in our Outreach Section.

In the 1990’s, a collection of hand-colored glass slides of Denver gardens from the 1930’s were discovered in a trunk containing Garden Club of Denver records. Research revealed that the slides were a result of a Garden Club of America effort to document important gardens of GCA member clubs across the country. The slides were gathered from the participating clubs and sent to San Francisco to be hand-painted. After uncovering their history and considering how best to ensure their safety and accessibility to the community, Denver Garden Club members then made the decision to donate these unique historical artifacts to the Denver Public Library’s Western History Collection. Copies were also sent to the Smithsonian. They can be viewed on the DPL website by clicking on the following link: early Denver gardens.

The following was summarized by Sheilagh Hudon, 2019

The Garden Club of Denver was founded in 1916, “to promote interest in gardening, in naturalization of Rocky Mountain flora, and in civic planting.” It was elected to The Garden Club of America in 1920. Over the years, the club and its members have been involved with many civic projects in Denver and along the Front Range but the most important and abiding one has been its affiliation with the Denver Botanic Gardens.

As early as 1919, the club recognized the importance of establishing a Botanic Garden in the Rocky Mountain Region and minutes from those early years reflect the active involvement and guidance of club members. In 1946, “Horticulture House” was presented to the Colorado Forestry and Horticulture Association as its headquarters by Mrs. John Evans, president of the Garden Club of Denver; five members of the club were on the Executive Committee- this was the forerunner of the Denver Botanic Gardens. In 1951, two members of the club signed the Certificate of Incorporation for the Denver Botanic Gardens and one, Mrs. Evans was the first President of the Board; three other members sat on the Board. In 1954, the Denver Botanic Gardens was made the main project of the Garden Club of Denver. The club and individual members continued to be involved with the planning of the gardens, the Endowment Fund, donation of the Waring House and greenhouse.

Over the years, many fundraisers have been held by the Garden Club of Denver with thousands of dollars in proceeds being shared by the Botanic Gardens and other non-profit civic groups. By 1966, over $200,000 had been donated by the club and individual members to the Botanic Gardens alone.

In the 1970’s, the club assumed planning and installation of plantings for the Lobby Court, financed the restoration of the Hammer Garden and developed and started working in the Home Demonstration Garden. In 1983, “Table Settings” was held at the Botanic Gardens as a joint project with GCD and Tiffany’s, the proceeds going to the Gardens.

In 1996, the Mt. Goliath Project was adopted to improve the Mt. Goliath trail on Mt. Evans and provide educational and conservation materials and docent training; this was a partnership with the Denver Botanic Gardens, the U.S. Forest Service and later, Volunteers for Outdoor Colorado. In 1999, the project was a finalist for the Garden Club of America’s Founders Fund Award, winning $5000, which was given to DBG, designated for materials for the onsite center. By the end of 2003, $43,786 had been given to the Botanic Gardens for the Mt. Goliath Project through the fundraising efforts of the Garden Club of Denver.

Among other financial donations the club has given to the Botanic Gardens:
-In 2001, we held a GCA Small Flower Show at DBG to celebrate the Gardens’ 50th Birthday; almost $12,000 was raised for the Mt. Goliath Nature Center;
-In 2003, we sponsored a lecture by Lauren Springer at the Gardens; $3000 was raised and donated for Plant Asia; -In 2006, the Garden Club of Denver, The Broadmoor Garden Club and Zone XII hosted the Annual Meeting of The Garden Club of America. DBG was instrumental in the success of the meeting, hosting two days of lunches and tours; the club was able to donate $10,000 back to the Gardens for its invaluable help; -Over $20,000 was raised for the Green Roof in 2007; -In 2008, we committed $5000 to DBG’s Capital Campaign, designated for the new cutting garden; -In 2009, over $100,000 was raised for naming rights to “Lainie’s Cutting Garden” in honor of our member Lainie Jackson for the innumerable hours she has donated to the design and upkeep of the cutting gardens over the years.

Garden Club of Denver has sponsored many collaborative educational programs held at the Botanic Gardens. Among them in more recent years:
-In 2011, we held a Garden Club of America Juried Flower Show; the Gardens put its facilities and staff at our disposal for the show and a luncheon featuring well known White House flower arranger and author Nancy Clarke- these events were open to the public; -in 2013, Dr. Eric Haskell gave a presentation on Vaux le Vicomte, France, open to the public; -in 2017, we invited our fellow GCA Broadmoor Club members to a presentation by Larry Vickerman on the transformation of the Gardens’ Chatfield location;
-2018 saw us sponsor several lectures at the Gardens:
-Mike Bone, DBG Horticulturist spoke on the Steppe Garden and gave us a tour of it; -Peter Hatch, of the Thomas Jefferson Foundation at Monticello, had an overflow audience for his talk;
-Michael Forsberg likewise delighted the audience in Mitchell Hall with his stunning photographs and lecture on place, rivers and wildlife;
– “Herbal Allies: Plants for Guidance, Wisdom and Protection” by Blake Burger, DBG Horticulturalist, inspired us; -DBG generously hosted tours. lectures and cocktails for the September 2018 visit of the GCA Conservation Study Group; we were able to give honoraria to speakers plus $1000 to the Gardens though this was paltry compared to the incredible support they gave us; -This month of September 2019, we host the GCA Shirley Meniece Horticulture Conference at the Gardens, bringing 250 attendees from around the country; it could not be accomplished without the extraordinary help of DBG.

Mutual awards and honors have been garnered over the years. In 1983, Ed Connors, husband of our member Hope Connors and a Life Trustee of DBG, became a GCA Member-at-Large and in 1990 our member Angela Overy founded the School of Botanical Illustration at DBG. In 1994, The Garden Club of America presented Panayoti Kelaidis, then Curator of Plant Collections at the Gardens, with the prestigious Florens de Bevoise Award for achievement with rock garden plants, at the GCA Annual Meeting in Hawaii; in 2004, Panayoti was accepted by The Garden Club of America as a Member-at-Large. Club member Lainie Jackson was recognized with the prestigious DBG Pete Peterson Award in 2003 and in 2015, she was honored with the Horticulture Volunteer of the Year award being designated in her name; she has now been a volunteer for over 60 years. This year, we are delighted and proud that the Botanic Gardens’ CEO Brian Vogt, was awarded the Cynthia Pratt Laughlin Award at the 2019 GCA Annual Meeting!

Many thousands of volunteer hours have been given to the Botanic Gardens by our members. Floral arrangements continue to be provided for the Waring House, Lobby Court, Visitors Center and Fete des Fleurs; in fall, pots in the Romantic Gardens are decorated with dried arrangements and members work in “Lainie’s Cutting Garden” during the growing season. Several club members serve on the committee for the Plant Sale Preview Party held every May and many members shop as well; it has now become a sold-out event. From the time of the first Board of Trustees of the Denver Botanic Gardens, our club President has sat on that Board as an ex-officio member; several of our members serve as Life, Emeritus and Term Trustees.
Sharing a strong collaboration, the Denver Botanic Gardens continues to inspire and educate us, provides us with meeting locations and supports us in our Garden Club of America and other civic obligations. Garden Club of Denver members are all members of the Gardens, continue to be involved with the Gardens and to donate funds as we are able. We are all proud of our mutually advantageous relationship. 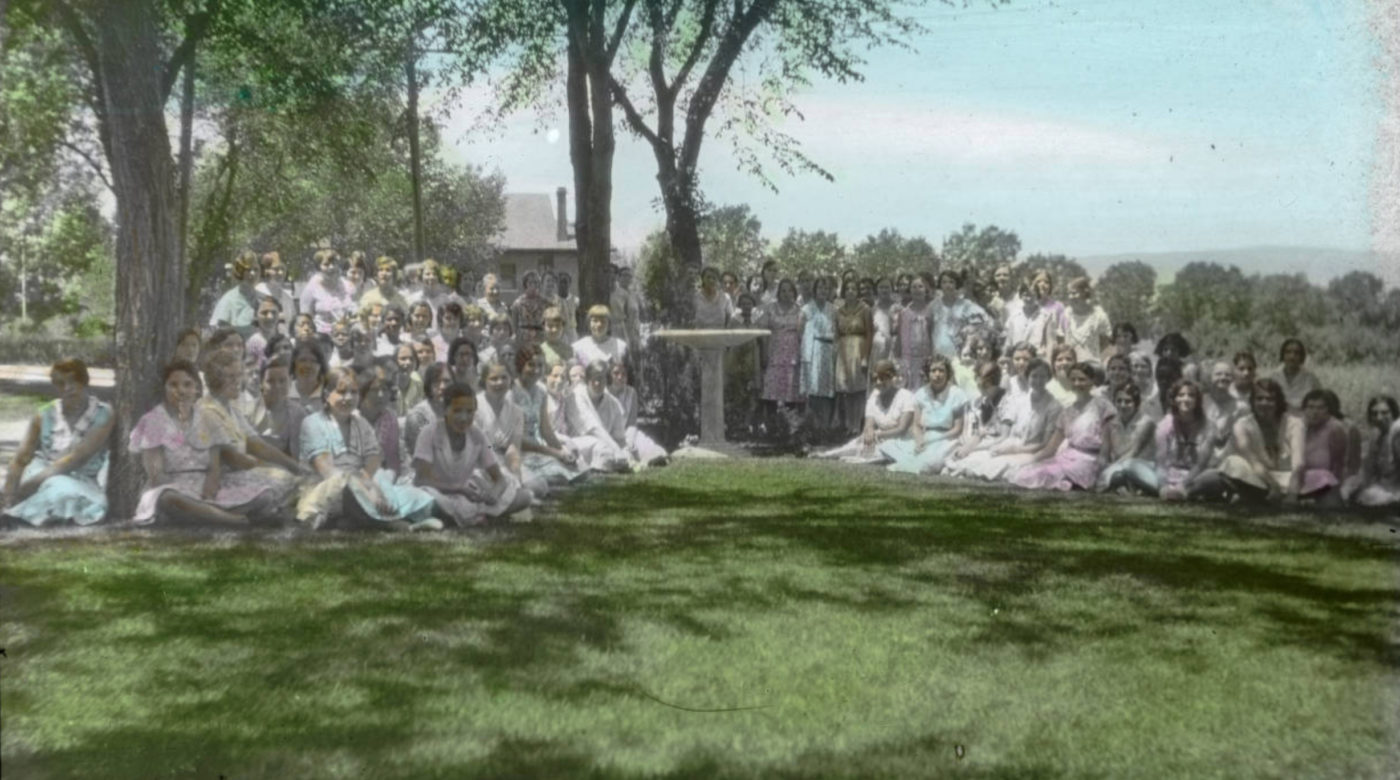