So what is a dinosaur and when did they roam this earth?

Dinosaurs arose during the middle to late Triassic Period of the Mesozoic Era, some 230 Million years ago. They were reptiles called Archosaurs or  “ruling reptiles” a group that also included birds and crocodiles.

Scientists  began studying dinosaurs during the 1820’s when they discovered bones of a large land reptile they called megalosaurus or “Big Lizard” buried in the English countryside. In 1842, Sir Richard Owen, Britains leading paleontologist first coined the term “Dinosaur”. Owen examined bones from three different creatures. Each of them lived on land, was larger than any living reptile,  walked with their legs directly beneath their bodies instead of out to the sides, and had three more vertebrae in their hips than any other known reptile. This group was named Dinosauria which comes from the ancient Greek word deinos or “terrible” and sauros or “Lizard” or “reptile”

So how was the current site of Dinosaur National Monument discovered?

In 1909, Earl Douglass, from the Carnegie Museum in Pittsburgh,  made the first discovery of eight articulated brontosaur tail vertebrae standing out from a sandstone ridge in eastern Utah. As he dug, he discovered skeletons one on top of another. From 1909 to 1924, over 350 tons of dinosaur bones were removed.This area is now known as “The Quarry” also known as “The Wall”. This tangled knot of dinosaur bones represent a classic mass burial deposit, a trademark of what geologists called the Morrison Formation. It extends from New Mexico to Canada and covers about 700 thousand square miles and has been assigned to the Jurassic system.

A dozen well articulated sauropods were excavated over a 15 year period ending in 1924. The most famous of which was the original “Brontosaurus” excavated by Douglass that remains the most complete ever found and has stood in the Pittsburgh Carnegie Museum since 1015.
The Quarry Visitor Center opened in 1958.

SO where is Dinosaur National Monument. It is located in a desert area in Northwestern Colorado and Northeastern Utah. President Woodrow Wilson established Dinosaur National Monument in 1915. In 1938 the monument boundaries were expanded from the original 80 acres to cover over 200,000 acres. The Monument also preserves the cultural history dating back 10,000 years including American petroglyphs and pictographs. The Freemont Indians lived in the canyons 800-1200 years ago followed by the Ute and Shoshone who still reside there today.

Two rivers , the Yampa and Green, cut through some 20 geologic formations of the Uinta Plateau representing 20,000 feet of strata that are exposed. The rivers join in the Monument near Steamboat Rock and flow westward as the Green Wildlife species in the area include over 1000 species of plants and animals including deer, beaver, coyote, eagles, hawks and owls. The canyons contain petroglyphs and evidence of prehistoric indian life with elevations spanning from 4,750 feet near The Quarry to over 9,000 feet at Zenobia Peak. 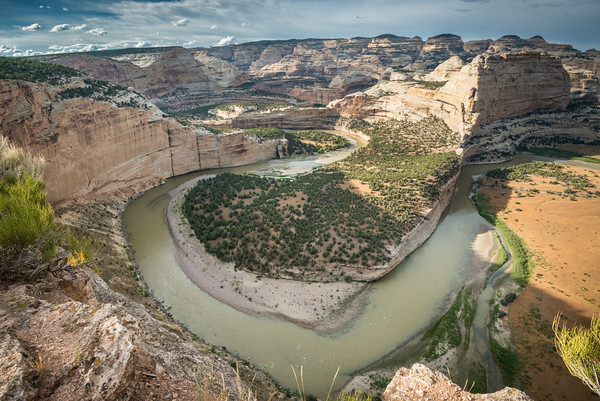