In June, while attending the GCA Quarterly Chairman’s Meeting, we were offered a fabulous opportunity to tour the Conservatory Garden in Central Park with GCA Honorary Member, Lynden Miller (See more about Lynden Miller below.) ​Located on the upper east-side, this six-acre garden is the Park’s only formal garden. It earns its name from a huge glass conservatory built in 1898 that was located at the site. In 1934, when maintenance of the conservatory became too expensive, it was torn down. Over the next three years, landscape designer Gilmore D. Clarke, landscape architect Robert Moses and planting “guru” M. Betty Sprout joined forces to refurbish the site. It opened to be public in 1937. The design work represents three different landscape styles: Italian, French and English. These styles comprise the Central Garden, the North Garden and the South Garden respectively. Entering the Conservatory Garden from Fifth and 105th, you pass through the famous Vanderbilt Gate which was installed here in 1939. It is so named because it served as the original entrance to the Vanderbilt Mansion at Fifth Avenue and 58th Street (the present site of Bergdorf Goodman’s) until the mansion’s demolition in 1927. One of the best examples of wrought iron art in New York City, the gate was made in France with ornate design detail by American architect George B. Post.

Straight ahead one first sees the Central Garden—-the Italian Garden. It is lined on both the north and south sides by walkways featuring huge over-arching crabapple trees, which bloom in the spring. Above the Italian Garden, on the west side, is a wrought-iron wisteria pergola which sits atop tiered yew and spirea bushes, looking down on a beautiful geyser fountain. The fountain creates a strong focal point in the middle of a meticulously mowed green lawn. The walkway under the pergola contains medallions inscribed with the names of the 13 original states.

Moving on to the North Garden, one enjoys a classic French experience. At its center is a lovely fountain titled the “Three Dancing Maidens”, constructed in 1910 by famous German sculptor Walter Schott. This piece is also referred to as the Untermyer Fountain, named after the family who donated it in 1947. The fountain is surrounded by a parterre with clipped germander hedges in elaborate scrolls. The sloped beds around the fountain are filled with 20,000 blooming tulips in the spring and 2000 Korean chrysanthemums in the fall. There are four entryways into the garden center, representing the four seasons. They showcase full arbors of climbing pink and white “Silver Moon” roses in June.

​
The third garden lying to the south is English in style and is much less formal than the other two gardens. It is planted for year-round visual excitement and changes monthly. At its center is a bronze sculpture installed in 1936 .…the Burnett Fountain which features two characters from Frances Hodgson Burnett’s “The Secret Garden.” This sculpture sits amidst a charming reflecting pool, full of water lilies and gold fish. The outermost ring of this garden is planted with seasonal perennials, shrubs, trees and grasses that bloom in succession from early spring through fall. The newest addition to this garden is a woodland slope along the outer perimeter.

Sadly In the late 1970’s, this upper east-side area had become one of the most dangerous sites in Central Park, full of graffiti and in serious disrepair. In a true act of inspiration, the then New York City Mayor Koch appointed Elizabeth (Betsy) Barlow Rogers to be the first Administrator of Central Park. One of her responsibilities was to begin the rehabilitation of the Conservatory Garden. For five years, GCA Committee members worked with her on the garden and raised funds to restore the three fountains and remove graffiti. Shortly afterwards, Betsy founded the Central Park Conservancy and began raising public/private funds which today are still vital for the care of the entire Central Park. As you leave the South Garden, you can see the plaque, acknowledging the Garden Club of America for its help in restoring the garden. It was truly a wonderful experience, full of “eye candy” while learning lots of history about this garden and more about Central Park itself! 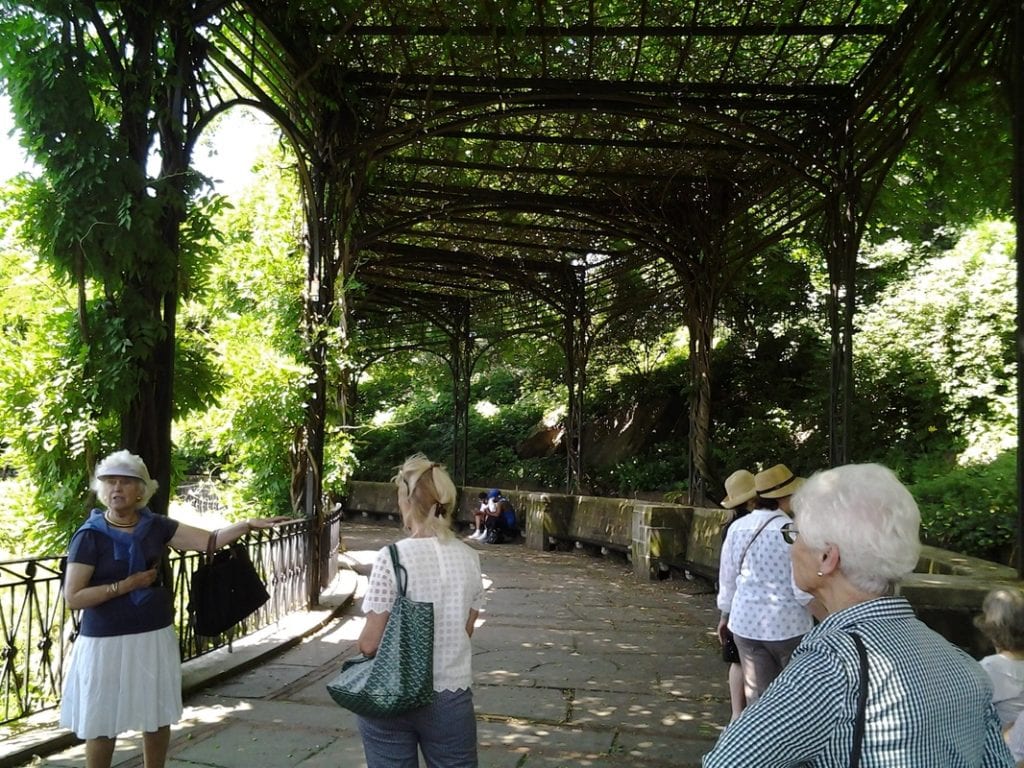 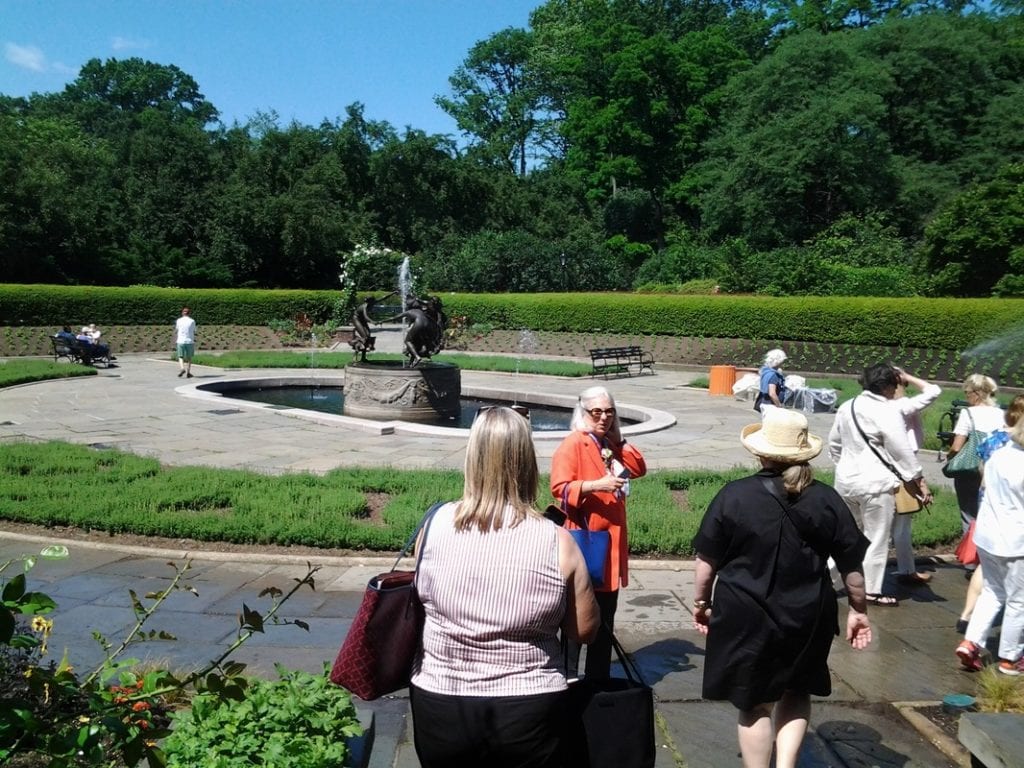 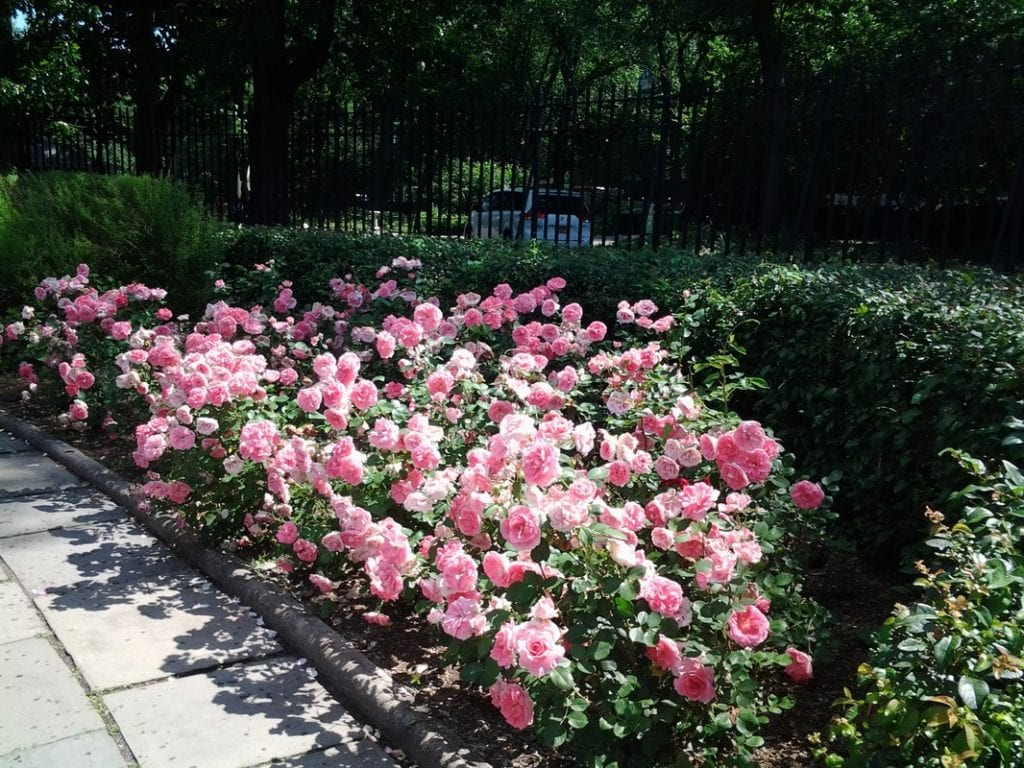